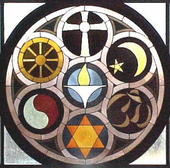 In 1961 the Unitarian Association and Universalist Church merged to become Unitarian Universalism. Both the Unitarians and Universalists have roots in Europe hundreds of years old. Unitarians were originally religious radicals, Christians who rejected the Trinity (God, Holy Spirit, Jesus) for a belief in the human goodness of Jesus, a reformer and activist. Unitarians believed in the importance of science and reason, and rejected religious creeds that required congregants to conform to one set of beliefs.

Universalists were also a radical offshoot of traditional Christianity, a reaction to the popular Calvinism of the period that preached hellfire and damnation. Universalists preached the unending, unconditional love of a creator who would never damn any person. Universalists were quick to point out that our world forces many people to live in hellish conditions like poverty, and that religious bodies should focus on alleviating suffering in this life, instead of worrying about suffering after death.

Unitarian Universalism draws from its Unitarian and Universalist heritages to provide a strong voice for social justice and liberal religion. Since the merger in 1961 Unitarian Universalism has spread across the United States, Canada, and there are even UU congregations in the Philippines, India, France, England, and Germany. UU denomination headquarters are in Boston, Massachusetts.Unitarian Universalists find truth in many religions, and also through science and reason. We are a part of a religion that keeps an open mind to the important, spiritual questions people have struggled with throughout all of time. We believe that personal experience, conscience and reason should be the final authorities in religion, and that in the end religious authority lies not in a book or person or institution, but in ourselves.

Unitarian Universalism is a "non-creedal" religion. We do not ask anyone to swear to a specific set of beliefs to join. UUs value freedom in religion; we use reason and even doubt to expand our understanding. We actively cultivate tolerance to better understand one another; and we practice justice, which is "love with its sleeves rolled up".

We seek wisdom from many sources — contemporary and ancient poets, the Bible, Buddhist texts, Native American religion, and many other practices and faiths. There is enormous diversity in how UUs seek truth. Some UUs consider themselves Christian, Buddhist or Jewish. Other members are attuned to earth-centered spirituality, or describe themselves as humanist or atheist. For others, spiritual things are too wondrous to define with mere words. Unitarian Universalists don’t have to believe the same things in order to worship together; we just have to want to seek the truth in loving, caring community. Like many world religions, a common idea in UU is that truth is always revealing itself.

Most UUs were raised in a different faith tradition or with no religion at all. Some are raising children in multi-religious families.  UU attracts many families because of our wonderful church school programs, which introduce and explain world religions in an equal, non-biased way, as well as helping children learn to think actively about faith and consider what it is they believe. Our children and youth know that religion isn’t just what you do on Sunday morning but how you live your life- helping others, striving for justice, living intentionally, and finding meaning in the every day. We travel diverse paths but are united by our belief in the worth and dignity of all, the desire to express our faith through acts of justice and service, and our care for each other.

Whoever you are, whoever you love, and wherever you are on your life’s journey you are welcome here! SUUC is a caring community that celebrates the growth of mind and spirit and inspires us to create a more just world.

Shoreline Unitarian Universalist Church was founded in 1966 by members of Seattle’s University Unitarian Church who wanted to build a strong and enthusiastic liberal religious community in the North Seattle/North King County area.

We are an energetic and passionate group of religious liberals who gather in community in a common search for and celebration of the values and understandings that give meaning to our lives.  Our membership is a blend of families, couples and single people, from infants to retired folks.

The people here come from many walks of life and backgrounds—some of us were once members of other denominations and some were “unchurched.”  There are Christians, humanists, agnostics, pagans, and other forms of spirituality among the congregation.  Since we are not a “theology-based” (creedal) religion, individuals are invited to create their own belief system. We are an ethical religion, which means that our actions—the ways we live our lives—are more important than beliefs.  We are a religion of “deeds, not creeds.”  Amid our theological diversity, we share a devotion to freedom, a commitment to reason and a belief in the sanctity of human beings.

We continue to learn from our past and seek to build on our liberal heritage by caring for one another and expanding our spiritual quest.  Our community is a place where we nurture our spiritual selves and discover ways to express our individual ministries.

While acknowledging our roots in the Jewish and Christian religions, Unitarian Universalists today also draw on the wisdom of other world religions, as well as from science, literature, the arts, labor, recreation and other cultural forms, as valuable sources of truth.  We view the sacred as being an inherent dimension of all life, a dimension that calls forth in us a deeper, more constant and more reverent relationship with the world and with each other.

Rather than teaching a particular set of beliefs we seek to nurture an inquiring mind, a tolerant spirit and a loving and concerned heart.